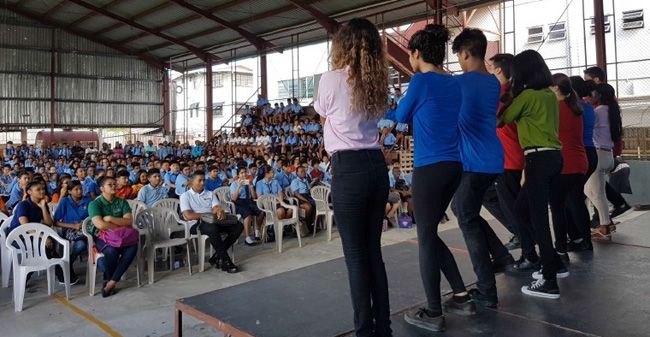 For the next three years, local students from the School of the Nations will be collaborating with students of the Nancy Campbell Academy in Canada, a strategic move that will see the two sides learning from each other. The exchange comes as part of deliberate efforts to advance the thinking and talents of students so that they can develop qualities that could lend to a better world.

In this regard, the Nations School and the Academy officially entered a three-year pact that will see the two institutions working closely.

Nancy Campbell Academy is a not-for-profit, private Baha’i-inspired residential and day school located in the city of Stratford, Ontario, Canada.

Through the partnership which was recently forged, students of the Academy traveled to Georgetown to build strong bonds of friendships and share skills with their counterparts at Nations.

The youths of Nancy Campbell worked for months training and practicing in order to be fully prepared to train the local youths in Dance Theatre that touch on Social Justice Issues such as Drug Abuse, Equality between Men and Women, Domestic Abuse, Gang Violence, and Racism.

Their goal is to use the Arts to touch on such prevalent issues that not only take place in Canada and Guyana, but all over the world.

A number of Fourth to Sixth Form students of Nations have sacrificed their free time between classes and after school to commit to learning the dances as well as training to become active agents for social action in their communities.

Since the Canadian students’ arrival on January 3, they have done a few performances in a number of communities in Georgetown and were engaged in a performance on Saturday at the Giftland Mall. Yet another performance is set for today [January 16] at 2pm at The School of the Nations.

Added to this, the youths from Canada are also training the local youths, through the Ruhi Institute, to become involved in the Junior Youth Spiritual Empowerment Programme. The Ruhi Institute has attached special importance to this educational programme and typically engages older youth as animators of younger peers aged 11 to 15 to help them develop their powers of expression, capacities for moral reasoning, developing a moral identity, and an ethic of service to others. The programme combines study, mentorship and social action.

This is only the beginning of the three-year partnership between the two schools, according to Director of School of the Nations, Dr. Brian O’Toole. He noted that while the two institutions have been collaborating over the years, this is the first move towards an official partnership. The partnership will also see students of Nations visiting the Academy later this year to further the collaboration.

According to a teacher attached to the Academy, Roya Sadeghi, one of the main focuses of the partnership is to strengthen the World Citizenship programme which was brought into being some years ago by the Academy.

“This programme aspires to help create world citizens not only in theory but also to put it into action. So when we talk about these qualities the world citizen must have, it also speaks to how do we apply those into the world we live in,” said Roya Sadeghi.

Roya and her sister, Anita – a graduate from the Academy – are among a contingent of about 10 individuals who are currently visiting Nations to share their knowledge and experience. In fact, Roya disclosed that part of the collaboration is an exchange of ideas.

This partnership is expected to be especially instrumental, since Nations already has in place a global programme of its own. Through its global programme, students of Nations have been able to engage in a number of social projects through USAIDS.

But according to Anita Sadeghi, who graduated from the Academy about four years ago, she is confident that the collaboration between the two institutions will serve to position students to be even better citizens of the world.

Speaking of her experience at the Academy, Anita Sadeghi said, “I have experienced the life -changing-oriented education that helped me fall in love with my education. My education plays a part in my service to humanity”.

Although she is currently in her first year of university, Anita Sadeghi said that her one year at the Academy continues to influence her academic path. In fact, she noted that through its mentorship programme, which she has experienced firsthand and continues to be a part of, the Academy over the years has been able to set a life-change programme for younger students. “We have really seen the alumni set an example for the students currently at the school,” said Anita Sadeghi, as she highlighted the Academy’s mission to further expand its programme.